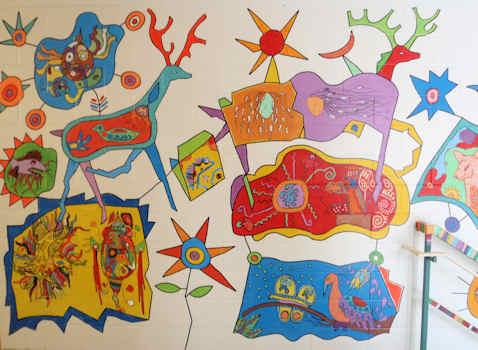 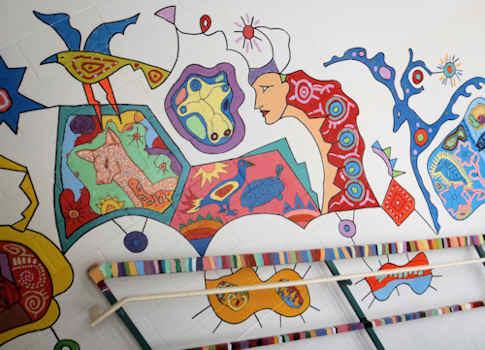 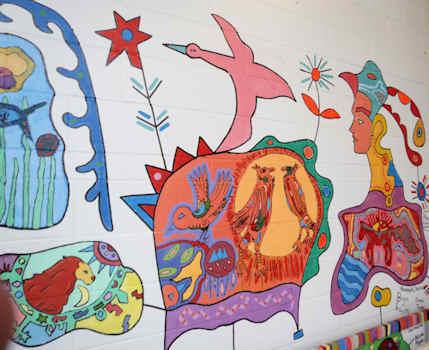 On February 22, 23 and 24 I worked on a mural project at Hadley Junior High School in Gatineau.

This is my first time working in this school collaborating with art teacher Kay Kerman.

In the beginning we were going to work on a mural depicting the school activities and values.

The students had made several drawings prior to my arrival. While some of these drawings related directly to the theme, others were freer expressions of nature and animals and I felt naturally more inspired by them.

While staying in Ottawa I saw this great outdoor mural at the Museum of Nature. I really liked the images of the mammoths and the running deer depicted on it and somehow these images stayed in my mind.

I also looked through some books of aboriginal art while working in class with Sylvia Bretzloff in my previous project.

When I started drawing on the wall, creating frames in which the students would later place their images, the first thing that came to my mind was the image of the deer as a frame. From this first image everything else started to unfold.

Working in the schools for these past ten years has taught me a lot about myself. In a moment when I wasn’t so sure about what to draw I ended up stepping into a new language which is something really exciting for me.

Back in class, after finishing the drawing on the wall ,we decided to suggest to the students the possibility of making a mural where the aboriginal aspects of drawing would be highlighted such as the flatness of the images, the tendency to ornate it with abstract motifs, the spiritual dimension of these expressions. I found myself saying to the students in a impromptu way that these drawings seemed to possess a universal quality that we could all relate to from the depths of our hearts. Being partly Brazilian native from my mother side I recognized this intrinsic connection in myself.

The students went on to make these great images of animals and native wild life. I think they were also surprised to find out they had this intuitive knowledge and capacity of expression in themselves.

I chose the song “Ñaumu” from the album “Ihu / Todos Os Sons” by Marlui Miranda for this video. It’s the music of the Yanomani Natives of Roraima in Brazil.

The song depicts an ancestral ceremonial dialogue practiced in various feasts and encounters when they exchange goods and news. They are the interpretations of cordial mannerisms, and has as its purpose to tighten the lassos which unite their peoples.

It’s a perfect way to honour the values of respect and collaboration highlighted in this project, which we truly lived while working on the wall for three days. Congratulations to the students!!

I hope you’ll enjoy it!!